The exhibition 'Sites of the Peaceful Revolution' takes you on a tour through Leipzig to 20 original locations, marked by pillars, where important events happened that helped to bring down the SED dictatorship regime in the year of the Democratic Change (1989/90).

The specificity, complexity and uniqueness of the entire Peaceful Revolution in Leipzig is mediated through photos as well as German and English texts. On the pillars, made of expanded metal from the former GDR border fortifications, information panels inform about important actions of political resistance in Leipzig. This idea is based on forms of cultural memory which are found at many locations of significant experience, where people hang flyers, labels, flowers, candles or other objects on fences to give voice to their feelings. This happened for instance in autumn 1989, when Leipzig's citizens demanded the release of political prisoners at the St. Nicholas' Church. With the pillars, the temporal and spatial dimensions of the Peaceful Revolution should become alive. In addition, the city transformation process is documented by historical photographs since 1989.

The thematic pillars mark 20 sites in Leipzig aiming at a remembrance of the power of the 'democratic idea', which helped the citizens on the path from dictatorship to self-liberation. Not only well known events are presented, such as the Monday Demonstration on October 9, 1989, the occupation of the Stasi headquarter, or the first free parliamentary elections on March 18, 1990, but also smaller and not less important actions of the opposition are displayed as well, including the Pleiße pilgrimage and the street music festival. Also the Statt-Kirchentag (Alternative Church Congress), which made Leipzig the centre of the opposition for three days, is shown as well as the formation of opposition by the establishment of the 'New Forum'.

With the permanent pillar exhibition, we present a central chapter of German history as well as the particular role of Leipzig as the City of the Peaceful Revolution in an impressive way.

After the Citizens Committee provided information about the events of 1989 with temporary pillars in 2004, we can now present the permanent pillar exhibition in Leipzig to you, depicting a central chapter of German history as well as the particular role of Leipzig as the City of the Peaceful Revolution in an impressive way.

The realisation of the project was  possible due to financial support from the Bundesstiftung zur Aufarbeitung der SED-Diktatur (Federal Foundation for the Reappraisal of the SED Dictatorship), the State of Saxony and their program "20 Years of Peaceful Revolution and German Unity" as well as the City of Leipzig. 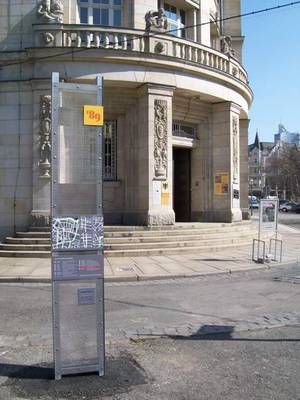